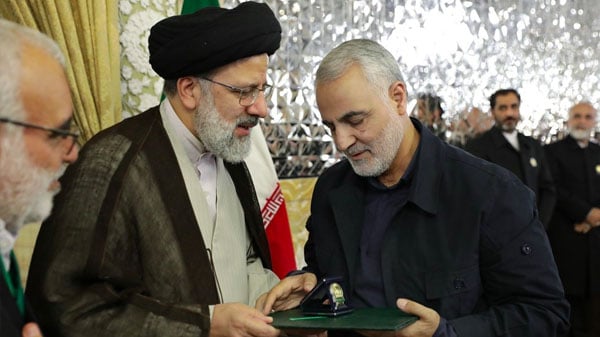 Iran’s presidential elections are nothing more than a façade —a form of propaganda to fool the world into thinking the Iranian system is democratic and has popular support.

With the Iranian presidential election one week away, democracy is in full swing in Iran, Islamic-Republic style.
But democracy in the Islamic Republic of Iran isn’t exactly the Jeffersonian democracy that Americans enjoy today. In fact, they’re exact opposites. Because Iran’s presidential elections are nothing more than a façade —a form of propaganda to fool the world into thinking the Iranian system is democratic and has popular support.
Look closer, however, and what you’ll see isn’t government of, by, and for the people but rather government of, by, and for the clerical tyrants —an Islamist theocracy run by a cruel and oppressive regime.
Yet many Western elites in media and politics are gullible idealists who buy the farce. Some even claim the US could learn a thing or two about democracy and elections from Iran.
What makes these people even more sad is how transparent the regime’s democratic façade truly is. Iran doesn’t even try to hide the fact that its powerful Guardian Council, which approves candidates for Iranian elections, is a tool of the supreme leader.
Indeed, Iran’s supreme leader, Ayatollah Ali Khamenei, appoints six clerics to the body, and the Iranian parliament elects the other six from a pool of jurists nominated by the head of the judiciary—who is appointed by the supreme leader. In other words, Khamenei appoints all 12 members directly or indirectly to the body that controls who runs for president. (And that’s even before the regime has a chance to rig the vote, which it was widely accused of doing in 2009.)
This year, the Guardian Council disqualified all but seven of the hundreds of people who registered to run. As bad as that sounds, though, the council narrowed the field from over 1,600 hopefuls to six actual candidates in the 2017 election. Never has a woman been allowed to run.
This is the democratic process in Iran—restrictive, discriminatory, and under the watchful eye of Iran’s unelected leaders, whom really run the country.
What’s striking about this year, however, is how much the regime seems to have manipulated the field in favor of one man: Ebrahim Raisi, an ultraconservative cleric who currently serves as Iran’s judiciary chief. Raisi, a close ally of the supreme leader, is the most well-known candidate and the clear frontrunner. Most observers expect him to win easily.
Raisi’s history should trouble anyone concerned about Iran’s trajectory. He worked his way up through the judiciary after the Islamic revolution in 1979, holding several senior positions.
Most notoriously, he served as deputy prosecutor of Tehran from 1985 to 1988, when he played a prominent role in the execution of tens of thousands of political prisoners. In the summer of 1988, then-Supreme Leader Ayatollah Ruhollah Khomeini ordered the secret executions, and Raisi was part of a “death committee” that carried out several, overseeing many of the killings.
Raisi’s complicity in abusing human rights goes well beyond 1988. As a cog in the wicked machinery of Iran’s “deep state” —a network of security, intelligence, and economic personnel and institutions loyal to Khamenei and his ideological vision —Raisi is attached to the regime’s cruelty and oppression. In 2014, for example, as prosecutor general, he delayed an investigation into several acid attacks against women in the city of Isfahan, rather than seek swift justice.
In 2016, Khamenei appointed Raisi as custodian of Astan Quds Razavi, the Muslim world’s largest charitable foundation, which manages the Imam Reza Shrine and a vast amount of property in the city of Mashhad. The organization, a massive business conglomerate, has billions of dollars in assets, serving effectively as a slush fund for the regime.
And then in 2019, Khamenei appointed Raisi to his current position. As head of the judiciary, Raisi has immense influence over the regime’s brutal system of oppression. Over the past two years, he’s supervised and directed the torture and execution of at least hundreds of people, including children.
All this history brings us to today and the most important point: Raisi isn’t just a candidate for president; he’s also a leading contender to succeed Khamenei as supreme leader.
Indeed, the judiciary chief has been a loyal follower of Khamenei and has become the supreme leader’s apprentice of sorts. Khamenei seems to be grooming Raisi for the top job. Plus, Raisi enjoys close ties with the Islamic Revolutionary Guard Corps, which will play a major role in the succession process.
This is especially relevant as Khamenei is now 82 years old, and rumors have been circulating about his health. It’s likely he’ll die during the next president’s term.
Khamenei surely knows this, which is why he’s laying the groundwork to ensure his vision of the Islamic Republic—anti-Western, antisemitic, and uncompromising—endures after he’s gone. In Raisi he sees a man who can carry on his legacy.
So, the presidential election may be a sham, but it’s still crucially important to Iran’s future —not because of who will be president, but because of who may be in prime position to be the next supreme leader.