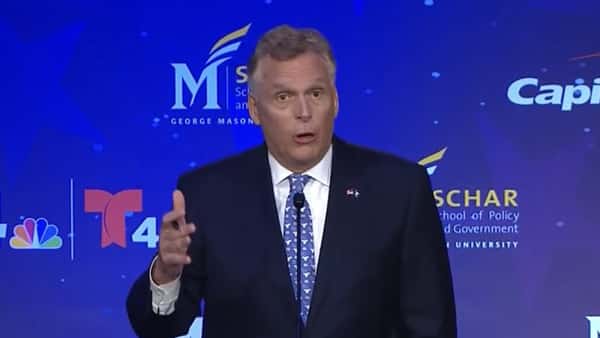 The Virginia governor’s race may be developing into an argument with a clear choice that has real implications for campaigns across the country in 2022. If Terry McAuliffe loses, it will be a warning to Democrats across the country that Big Government Socialist values and woke policies may not be sustainable.

The Virginia governor’s race may be developing into an argument with a clear choice that has real implications for campaigns across the country in 2022.

Tuesday night’s debate clarified the dramatic gap between Republican Glenn Youngkin and Democrat Terry McAuliffe. It is clear Youngkin stands with parents who care about their children’s education, and McAuliffe stands with the union bosses who want total control of our lives.

During the debate, McAuliffe made what may be an election-collapsing mistake. He spoke honestly about the degree to which he would exclude parents from their children’s educations.

Republican Youngkin: “I believe parents should be in charge of their kids’ education.”

Democrat McAuliffe: “I don’t think parents should be telling schools what they should teach.”

The next night on FOX News Channel’s “The Ingraham Angle,” Youngkin expanded on the difference between he and McAuliffe:

“[McAuliffe] believes that government and politicians know better for our children than parents. He wants to exclude parents from being involved in educating our children… Virginia parents have been standing up for the rights of their kids for the last 20 months, fighting against school boards who have been trying to impose all kinds of things on them. They’ve been asking for schools to be open, and what you saw last night was… [McAuliffe] doesn’t care what they think. He wants to dictate what they learn, he wants to teach our children how to think, and he wants to excuse parents from all of it.”

The simple fact is that former Gov. McAuliffe is dependent on union bosses to fund his campaign and provide workers for the turnout effort. McAuliffe has received $525,000 from the National Education Association and $425,000 from the American Federation of Teachers. That $950,000 from union bosses goes a long way to explaining McAuliffe’s contempt for parents.

You can better understand McAuliffe’s willingness to get rid of Virginia’s Right to Work Law when you learn that the Service Employee International Union has given his campaign $689,167. McAuliffe’s conversion to Big Government Socialism and radical policies has also earned him $1.75 million from Independence USA PAC (Mike Bloomberg’s PAC) and $250,000 from George Soros personally. This is only the end of September, so McAuliffe’s anti-parent, pro-Union position will likely earn his campaign even more money in October as it desperately tries to grab the governorship.

However, McAuliffe’s open contempt for parents and subservience to the unions may cost him the election. After all, there was recently a rally of more than 1,000 people in Loudoun County, Virginia, who were angry about leftwing radicalism being taught in their schools. Parents of students at Thomas Jefferson High School for Science and Technology in Fairfax, Virginia, are outraged because school officials are “purging” students of Asian descent to meet woke quotas. In fact, citizens across the country from every background are upset that leftwing radicalism is taking hold in schools while standards are being lowered – or even abolished in the case of Oregon.

Virginians have historically been proud of their education system and have valued their children and grandchildren getting good educations. They see the unions undermining this tradition and crippling their children’s futures.

When McAuliffe crystallized the gap between parents and union bosses in the debate Tuesday, it may have been the key moment of the campaign. If Youngkin pushes the issue relentlessly for the next month, McAuliffe may be permanently branded as a union boss-controlled Big Government Socialist candidate – and therefore unacceptable to most Virginians.

This kind of decisive defining moment is not new for Democrats. Consider the following examples:

In 1972, Democratic presidential nominee, Sen. George McGovern announced he was “1,000 percent behind” his vice presidential nominee Sen. Tom Eagleton (who had admitted after accepting the nomination that he had been given electric shock treatments for depression). A week later he dumped Eagleton. He lost in a landslide.

In 1984, Democratic presidential nominee Walter Mondale proudly announced in his acceptance speech that he would raise our taxes. His support collapsed, and he never recovered. President Ronald Reagan cheerfully contrasted his tax cuts with Mondale’s tax increases. The result was a landslide.

In 2004, Sen. John Kerry was filmed windsurfing in Nantucket in a fancy outfit. This convinced swing voters across the country he really was an elitist who was out-of-touch with normal Americans. A few weeks later he lost.

In 2016, Secretary Hillary Clinton attacked most Republican voters as “deplorables,” thereby firing up the base of Donald Trump’s voters. A month later in a shocking upset she lost.

McAuliffe’s declaration that “I don’t think parents should be telling schools what they should teach,” may join this list of campaign-dooming mistakes.

If McAuliffe loses, it will be a real warning to Democrats across the country that Big Government Socialist values and woke policies may not be sustainable – even with massive union and billionaire funding.