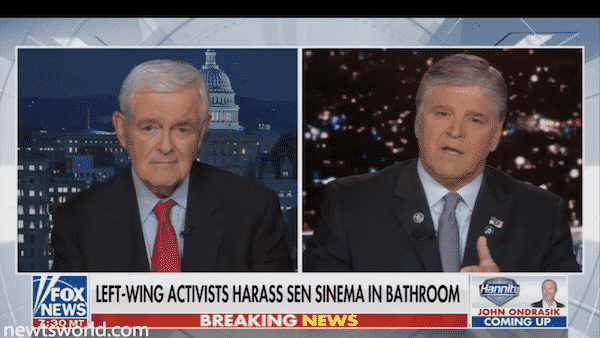 Newt reveals why he believes the radical left is playing with fire as Democratic politicians are unable to align on several key issues.

NEWT:
I think you’ve got with Biden such a weak president. I am very worried that you’re going to see the Chinese communists decide to occupy Taiwan. The number of airplanes that have flown over Taiwan from China in the last four days is just astounding. It is a prelude potentially to them taking over the island. It’s because Biden looks so unbelievably weak. I did a podcast recently with the Gallup poll expert who spent 40 years now in Central America. He describes that in the Biden world, you now have people who fly from Haiti to Ecuador and then come up through Colombia to the United States by the tens of thousands. You have Africans flying into Brazil to come up to the United States by the thousands. And all of this is spreading and accelerating. You’re going to have 400,000 or 500,000 people every single month. No society can absorb and assimilate that scale of migration. These things are real crises. And of course, the totalitarian left, which is what you’re watching in that bathroom and what you’re watching around Senator Manchin, they are playing with fire. What you showed from Talladega, what you showed from the football stadiums, there are a lot more of us then there are of these crazed radicals. If we ever decide to respond in kind, they’ll be gone.
NEWT:
Look. I can’t quite figure out what Manchin is doing because on the one hand, Manchin says the bill has to include the Hyde amendment which says you cannot use taxpayer money to pay for abortion. There is nobody on the left who’s going to accept that, nobody. I don’t know if he is setting up an excuse to kill the bill or if that’s just a maneuver to negotiate. In the case of Sinema, she has shown very tough, very calm, very much just being her own person. Frankly, they can’t pressure her very much. She has been elected in the state which elects Mavericks. It elected Barry Goldwater. It elected John McCain. She is perfectly in that kind of tradition. But the big government socialists are desperate, and that’s what you’re seeing, is a desperation which I think the rest of the country is beginning to react to. That’s why you’re getting these chants at football stadiums and at Talladega. The average American is fed up with being browbeaten by a bunch of crazy left-wing radicals.