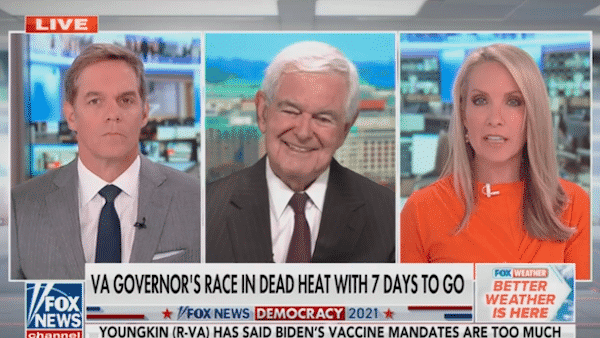 Newt discusses the gubernatorial race in Virginia and how recent poll numbers show Americans are against the left’s radical policies.

Well, I assume that McAuliffe is finding that he can’t motivate Democrats to go vote and so Biden like Obama over the weekend sort of the last desperate pass to try to get people to show up and vote. On the other hand, “The New York Times” reported this morning that this will be the most expensive Thanksgiving dinner in American history. If you are bringing in Biden with inflation, with the massive illegal immigration, the problems of getting out of Afghanistan, at some point we have to say is this really helpful or not? But you see the difference in the two campaigns. Youngkin very intelligently early on said I will run as a Virginian on Virginia issues. I will ignore all the effort to nationalize the campaign. Oddly enough McAuliffe was governor for four years decided he couldn’t win on Virginia issues, but he has been trying desperately to nationalize the election to make it about Trump, to make it about Biden, to make it about anything accept McAuliffe and Youngkin. My hunch is it doesn’t work in the end and McAuliffe will probably get defeated because people won’t turn out to vote for him.

I think it is probably a problem but partly — if you thought you bought a racehorse and you ended up buying a donkey there ought to be a point you decide not to race it. They have bills that aren’t very popular. The more people learn about them the less popular they are. What he said yesterday is a lie. They talk about a big tax increase that they’re trying to get written into the senate finance committee. A big fight between the Democrats and house ways and means and the Democrats and senate finance over how to raise taxes. Now, all this talk about Biden we can spend — his numbers, 3 1/2 trillion. 1.75 trillion. That’s like 5.25 trillion. Is there anybody in America who believes you can spend 5.25 trillion, not billion, trillion dollars and not raise taxes? And not somehow pay for it with deficit financing? So I think they’ve got themselves out on a rhetorical limb. They can’t get off it. For some reason nobody on his staff can explain to Biden that this just makes him unbelievable. Nobody believes what he said yesterday. Not either side I don’t think.

I think the Democrats are pretty desperate. They want to get something done for the president because he is circling the drain with the electorate in the country. As a result, they’re willing to do almost anything. I think you will see legislation passed. The problem is it is not popular with the American people and doesn’t address concerns people have.

I’m not sure yet because you have the hard left in the house, the people who are basically big government socialists. They have all said they won’t vote for the infrastructure bill until they see the details of the larger bill, the 3 1/2 trillion Bernie Sanders socialist bill. Meanwhile, you’ve got people like Manchin and Sinema, senators in the Democratic party saying they aren’t going to vote for a 3 1/2 trillion dollar bill. I don’t see any — to the best of my knowledge there has been no movement. All you have is people talking, gossiping, leaking, but in fact they’re about the same place they were two months ago, and the reason is pretty straight forward. The American people do not want bigger government. Gallup reports now we’re back where we used to be about 58% want smaller government. When you tell them about these bills, they think it adds to inflation and inflation is what will kill the Democrats next year. But “The New York Times” is right, and we have the most expensive Thanksgiving. It doesn’t matter because you can’t afford the gasoline and then you can’t buy Christmas gifts because they’re on a ship off Long Beach which Biden the other night on CNN couldn’t remember the name of. At some point this stuff all breaks down in a very practical and human level. It’s not about politics and ideology, it doesn’t work. I think that may be the best Republican battle cry next year. This ain’t working. Which is what happened to Jimmy Carter.