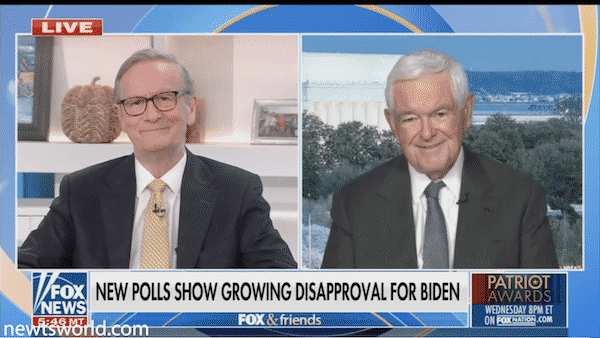 Newt gives his thoughts on the Biden administration’s weakness and how it lacks the ability to get anything done with its policies.

You know Mark Halperin did a great column this morning pointed out that story is going to be drowned. It’s going to be drowned, first of all, by what happens in Wisconsin in the trial. Going to be drowned by the argument on CNN that there is a deep, bitter split between Kamala Harris and Joe Biden and their staffs. It’s going to be drowned by what’s happening in terms the house itself. So, I think going to get a very tiny bump out of that. Because the truth is, when you talk, for example, about roads, the average person thinks oh, yeah, I just filled up my car and my truck and I can’t afford it because Biden’s policies are failing. And if this inflation continues, the current poll numbers, which are the strongest we have seen in 40 years for Republicans are going to get bigger, not smaller, because people just can’t afford to live in a Biden inflation world.

Yeah, I mean, one of the challenges of being president, whether you are Donald Trump or Barack Obama, or Joe Biden is you are actually seen as the leader of the country. And so if things go well, you get the advantage, if things go badly, you get the punishment, and I think people are looking out, you know, Kamala Harris, to her credit, why back when she was visiting Vietnam, had this cryptic comment where she said, you know, you better be ordering your Christmas gifts early because she had been briefed on the logistics supply chain problem. The problem they have got is they didn’t do anything about it Buttigieg who in theory could be responsible took two months off for parental lead which I think by the time you cabinet manage almost unimaginable. He hasn’t solved anything. The secretary of energy asked about what she was going to do about gasoline prices broke up laughing as though she were Kamala Harris. People look at this total lack of ability to get anything done and they blame the president. That’s just how life works in a free society. You elect them. They either deliver or you decide not to re-elect them.

Look, I think Ted Cruz captured it perfectly when he said that Biden combines the incompetence of Jimmy Carter with the radicalism of George McGovern. That is a very dangerous pattern. And it’s one which is not getting better. When you see the president of the United States fall asleep in public at a global warming conference as he warns us how big a deal global warming is. First of all, you cringe for America. Whether you are a Democrat or a Republican, having an American president look so weak and so out of it and that’s why the British announced yesterday they are prepared to send a combat team into Ukraine if the Russians were to invade Ukraine. The British, I think, have lost any sense that Biden would be capable of standing up to the Russians. And so, you are going to see more and more assertiveness by our allies because they think this is such a weak administration.