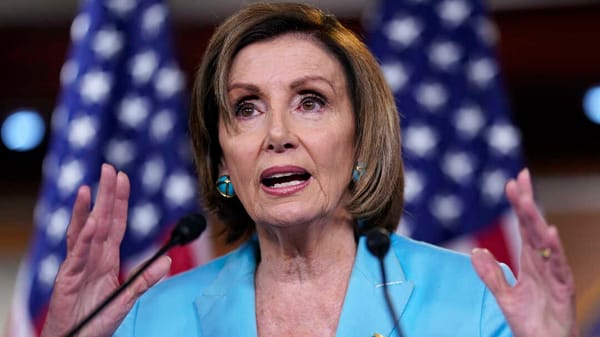 The Democrats can’t seem to break out of their commitment to Big Government Socialism, wokeism, cronyism, and corruption. Having Jan. 6 to occupy their minds makes them feel more secure even if the impact does not help them at all.

Speaker Nancy Pelosi and the House Democrats seem happy with their totally partisan Select Committee on Jan. 6. They will have activities this week including speeches by President Joe Biden and Vice President Kamala Harris at the Capitol.

Let me be clear: Those who broke into the Capitol, attacked police, and threatened members of Congress last year should be tried and brought strictly to justice. Further, Congress should seriously investigate what happened and how we can prevent it from ever happening again. But that’s not what is happening on Capitol Hill this week.

In the world of Big Government Socialist Democrats (nearly every elected Democrat in Washington) the riot last Jan. 6 is their best weapon to smear Republicans as unpatriotic. Just as the Russian Dossier, the Ukrainian phone call, and virtually every act of political theatre to defame Republicans has failed, this, too, will soon become an absurdity.

The reasons are simple.

First, Americans are worried about everyday life. As the Democrats are myopically stuck on partisan bickering, Americans see them actively not solving problems.

Every school that is closed by Teachers’ Unions, despite evidence that distance learning hurts children – especially the poor and minorities – also hurts union-owned Democrat candidates.

Every report of people illegally flooding into the country with no COVID-19 testing or serious scrutiny hurts Democrats. (And when Americans learns more than a million of these people have been secretly sent around the country, they will get angrier).

Every day that crime goes up, people are murdered, women are raped, carjackings multiply, and gangs openly steal from stores without consequences, it hurts the Democrats.

Every visit to the gas station hurts the Democrats.

When COVID-19 tests and medicine for therapies are not available after a year of total Democratic control in Washington, Democrats are the ones to blame.

When the number of cargo ships waiting outside Long Beach climbs to more than 120, and supply chains are halted across the country, the Democrats begin to be the party of incompetence.

Second, clumsily rehashing the events of Jan. 6 is a double-edged sword. Serious unanswered questions about who was doing and saying what could embarrass Democrat allies and make them co-conspirators in accepting risks at the Capitol.

For starters, as a former Speaker, I know well that it is the Speaker’s responsibility to oversee the protection and defense of the Capitol. It is clear that Speaker Pelosi failed to do so – and it’s going to be deeply uncomfortable for Democrats to talk about that.

Further, House Republicans are beginning to ask about people such as Ray Epps, who was a suspected ringleader of the attack but has never been arrested. Some are suggesting he was an FBI asset (similar to the absurd case of the attempted kidnapping of Michigan Gov. Gretchen Whitmer which was allegedly fostered and orchestrated by FBI agents). Attorney General Merrick Garland has, so far, refused to answer Rep. Thomas Massie’s question about FBI assets at the Capitol on Jan. 5 and Jan. 6.

House Republicans held a telephone press conference outlining the unanswered questions – and the Democrats’ efforts to block information that was unfavorable to them. Republican Conference Chair Elise Stefanik, and Reps. Jim Jordan, Rodney Davis and Jim Banks outlined what they were trying to learn – and how they were being stonewalled by the House Democrats and the Biden Justice Department. They also pledged to use their majority next year to get to the bottom of unanswered questions. You can listen to the whole press conference here.

Lastly, the process of the select committee is only getting more corrupt and destructive. Using an outrageous, painful, and unacceptable event (which I fully condemn) to smear your opponents rather than find the truth will ultimately be repudiated by the American people.

The best explanation of this deliberate smear campaign is the new book January 6, by Julie Kelly. The book is a thoroughly researched case about what happened on Jan. 6 and what the Democrats have done since then to smear Republicans and conservatives. Kelly makes clear that the truth has been a casualty of the Democrats’ political theatre.

For all these reasons, Jan. 6 is going to be a disaster rather than an asset for Democrats. It will lead them to lose even more seats in November.

The Democrats can’t seem to break out of their commitment to Big Government Socialism, wokeism, cronyism, and corruption. Having Jan. 6 to occupy their minds makes them feel more secure even if the impact does not help them at all.

I am reminded of the great political scientist Samuel Lubell. He had a deep sense that he did not understand most of America, and he was passionate for Americans to teach him. So, Lubell was focused on knocking on doors and interviewing voters. As a result, he was one of the first to predict the rise of the Republican Party in what was then the solidly Democratic South.

In my own career, I never forgot the lesson Lubell learned at a 1952 election night party in New York City. It was a gathering of intellectuals. As Lubell surveyed the room, he realized no one there had voted for Gen. Dwight Eisenhower to be president. They were all liberal academics and they instead identified with Gov. Adlai Stevenson, the Democratic nominee, as one of their own.

Lubell realized that Eisenhower had won in a landslide (ending the 20-year Democratic Party control of the White House) and yet none of his fellow intellectuals had voted for the winner. Worse, they had contempt for Eisenhower as “a golfing general.” Sure, Eisenhower led the allied armies in defeating Italy and Germany, but he wasn’t their kind of intellectual.

Lubell realized that cleverness and narcissism may not be sound tools for understanding politics in America. But listening to the real problems and real hopes of the American people would force an agonizing level of change for Democrats.

The focus on the Jan. 6 attack allows House Democrats to avoid rethinking their positions, focusing on real problems, or modifying their ideological fanaticism to try to find real solutions to real problems.

Americans will see right through the charade.