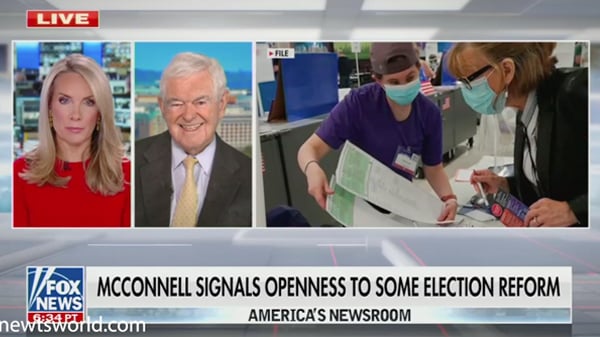 Well, first of all the — there is no evidence that vice president Pence was confused. He did exactly what the constitution suggested, and he served essentially to simply transmit the results, but I think if they want to clarify it that’s fine. The problem is the Democrats, I think, believe if they don’t find a way to steal the election, they can’t compete. That’s why you had the New York City council making it legal for people who are illegally here who are not citizens to vote in city elections. That’s why you see this desperate effort in the senate right now. The three major provisions of the senate democratic bill are all opposed by over 80% of the American people including African Americans and Latinos. People want to know who you are when you vote. People want to know that your vote will be counted, and people do not want to have ballot harvesting where people go out and gather up lots of votes and you don’t know who voted and who gathered. So, on every single major account we have all sorts of polling on this, the American people oppose the making it easier for politicians to steal the election and I think that’s why they are going to — it will be impossible for them I think to pass this bill.

We have no reason to believe they won’t. I think Manchin’s popularity has gone up every time he said no to left wing Democrats, he has become more popular in West Virginia. In the case of Sinema she is in the great tradition of Barry Goldwater and John McCain. She’s a maverick, she’s her own person. She proved when the agitators followed her into the lady’s room, she is not easy to shake, and I suspect they are where they are. Manchin was sort of toying with it the other day and saying we might fix the one piece with the filibuster. By the way it would take 67 votes to fix it. That was sort of just playing with Schumer and not being serious about it.

She laughs at everything, and it is a weird laugh. There is actually a website that has 10 hours of her laughing. But second, her speech yesterday where she compared January 6th to Pearl Harbor and 9/11, I think was proof that California education is even worse than we thought. It is inconceivable you could compare a riot at the capitol to the Japanese attack at Pearl Harbor or the terrorists who killed almost 3,000 Americans on 9/11. Yet Harris cheerfully listed the three together as though they were the same event. And I think it tells you how totally unfit she is to be vice president. She is vice president. They won the seat. I hope the American people learned a lesson about picking people who don’t know anything.

She will do as good a job with voting rights as she has done with the border which remember was her first assignment.