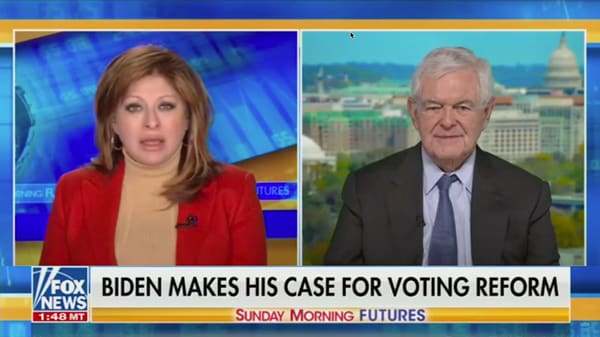 Look, I think they talked themselves into a dead end. The Biden Harris, Schumer Pelosi team for reasons I don’t understand went out of their way to pick things they can get done. They knew that they did not have Senator Manchin or Senator Sinema. They knew they were going to lose the vote in the senate. They just kept pounding on and by the way these are not very popular bills. I mean, if you ask people do they want to see more spending and have more inflation, the answer is overwhelmingly now. If you asked people if they want a bill which would block identifying voters by identity, the fact is photo ids are acceptable to about 87% of all Americans. Because they want an honest election, not a rigged election, so but this goes on and on. Biden wants us to worry about the border in Ukraine the American people are worried about the border with Mexico and you have a gasoline problem, which is going to get worse and so Biden is calling on Russia at the same time he’s trying to pressure Putin he’s hoping the Russians will pump more oil to give them more money to build their military even stronger, I mean, this stuff makes no sense if you are a normal person, but on the American left it apparently substitutes for any kind of critical thought.

Look, I think big government socialism doesn’t work, but the people who believe in it believe in it almost as a secular religion, they can’t get off of it. So, you really end up with people who are as fanatic as the revolutionaries in the French revolution or the revolutionaries in a 1917 in Moscow and they believe and when you show them the facts, they reject the facts because it threatens their belief system. When T
Trafalgar came out with a poll this week that showed the Republicans may be ahead by 57-42 in terms of who you will vote for Congress, that would be a landslide that would take it back probably to the 1920 to have a Republican congress that was that strong and would mean probably picking up six or seven seats in the senate and between 40 and 70 seats in the house. You would think at that point that the democratic leadership would get together and say you know this ain’t working. Instead, they get together and they start chanting, we got to get this done even though no one outside their group wants it.

You have both with attorney general Garland and with this select committee on January 6, people who have run amok they are breaking the rules. They are going after people in a way which is reminiscent of the British monarchy using closed-door systems that we outlawed deliberately because we had seen it and we knew what it was like. They are running over peoples of civil liberties. What they need to understand is on January 4, next year, you will have a Republican majority in the house and a Republican majority in the senate and all these people who have been so tough and so mean and so nasty are going to be delivered subpoenas for every document, every conversation, every tweet, every e-mail because I think it’s clear that these are people who are literally just running over the law, pursuing innocent people, causing them to spend thousands and thousands of dollars in legal fees for no justification, and it’s basically a lynch mob. And, unfortunately, the attorney general of the United States has joined that lynch mob and is totally misusing the FBI. And I think when you have a Republican congress, this is all going to come crashing down, and the wolves are going to find out that they’re now sheep. And they’re the ones who are, in fact, going to I think face a real risk of jail for the kind of laws they’re breaking.

Well, look the Democrats are losing on two fronts — two fronts. They’re losing on the reality front. I mean every time you go to buy gasoline, you’re reminded they’re incompetent. And they’re losing on a policy front people don’t want a socialist left-wing, radical American. They’re going have a two front fight they are going to lose both fronts, and I think it’s going to lead to one of the largest tsunamis in American history as they get thrown out.