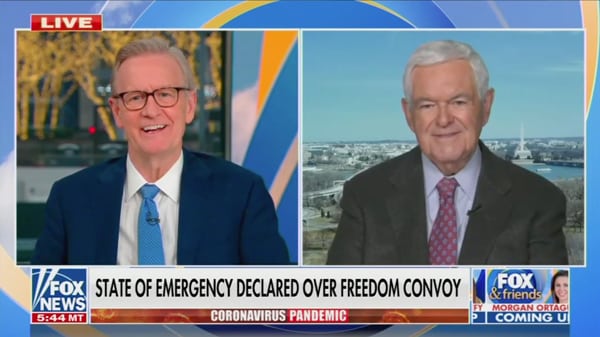 Newt discusses a state of emergency being declared in Ottawa, Canada over the”Freedom Convoy” of truckers who have settled around the Canadian Capitol.

I think you have a straight up power struggle between the people and a government. And you have a government that’s all across the planet that’s using the epidemic as an excuse to impose its will to try to coerce people into obeying. And you know, I think taking no prisoners. The fact is, you know, I would have thought the Canadians had a long tradition of being relatively polite nice people. But now that you have truckers challenging the government. The government is reacting ferociously. More ferociously than you would ever have for that kind of a protest in the U.S. which, to me is amazing.

Well, I think, again, I think you are seeing this happen in country after country. It’s finally hit people this stuff is all bolognas. It’s all about a power struggle has nothing to do with public health has nothing to do with concern with you as a person. It’s all the same thing with Stacy Abrams and the kids in the classroom. All of those kids are being coerced into wearing a mask which they don’t need to be doing. Meanwhile, as a powerful politician, she is sitting there with no mask because after all how could she get a good picture if she is in a mask? And you have seen this kind of hypocrisy over and over across the whole system whether the governor of California, you know, going to a football game without a mask while demanding that everybody in California wear a mask. But you do see all over the world, people getting fed up with governments that have become remarkably authoritarian and are willing to use their police powers to really go after people in a serious way. By the way, I think Go Fund Me is now going to be investigated by at least three different state attorney generals because it took the money and then didn’t give it to the people it raised the money for.

It depends on how mad the truckers get and also depends on whether other people start helping them. You know, there is a point – when Callista and I did a movie about John Paul II going back to Poland in 1979. There is a great moment where this person says when a million people came out for mass in Warsaw we looked around and realized there were more of us than there were of the security guards and all of a sudden, we said why are we afraid of them? I think what you are going to start seeing happen is people are going to end up siding with the truckers against the government.