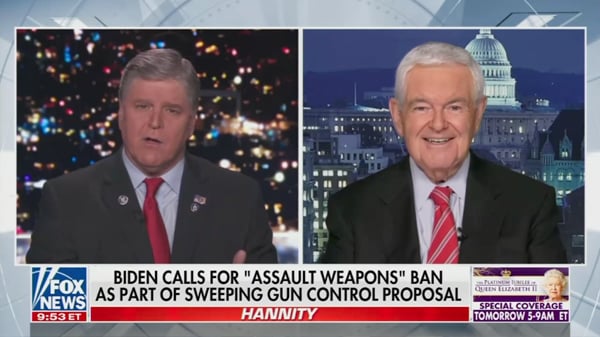 First of all, I think it isolates them because it makes them sound nuts but in addition, you know, somebody just a few minutes ago on your show, talked about them being a cult, and I think that’s a pretty accurate way to think about you have a group of people and a room, they chant about fantasies and the fantasies become their reality in than they want to pass bills based on their fantasies and it’s all crazy. The objective fact for example is that most young African-Americans who we’re killed, are killed by African-Americans, and the reason that they are dangerous is because we have left wing democratic district attorneys who refused to lock up the killers. So, if you look at the people who are out on the street today, who are really dangerous, who our killing people in Chicago or San Francisco or St. Louis, or Baltimore, those folks are in fact black criminals preying upon black victims. You not going to hear that on the view, you’re not going to have any honest conversation that is based on facts. What you are going to hear it is a group of cultists chanting the various things they’ve learned as though if only they could chant it long enough, the world would resemble it.

We are doing a lot of polling at the America majority project .com, which is available to everybody and what we are discovering is African-Americans, Latinos, Asian Americans, all of them have a simple problem, they go to the gas pump, they can’t afford it, they go to the grocery store, they can’t afford it, they look for infant formula, they can’t find it, you think they’re going to somehow be affected because a group of nut cases on the view say nasty vicious and vindictive things. Or for that matter, the Democrat party.

It’s their problem I think they’re going to be crustless fall. And the core problem is simple. The things they believe in don’t work. The whole build back better turned into build back poorer all of us are poor today, everybody listening tonight is poorer because the Democrats and Joe Biden, and the country is on the edge of bankruptcy because of the Democrats and Joe Biden. Words aren’t going to overcome that reality.