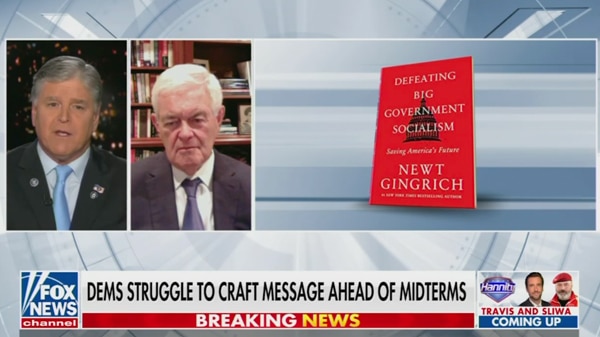 I think the big government socialists in the congress and the governorships, I mean Newsom would be the big perfect democratic nominee for 2024. He could campaign on the grounds that he will screw up the whole country as badly as he screwed up California. And you’d at least have an honest debate. The fact is that the policies they believe in putting criminals back on the street, tolerating massive drug abuse, creating entire homeless communities that are basically open air drug markets, having a system where the schools do not teach but spend lots of hours worried about what your race is and what your use of pronouns is. Go down the list. And what you have is an alternative, almost religion, this is a theologically fight. These people believe in an alternative world. It’s not a political fight. It’s not between left-wing traditional Americans and right-wing traditional Americans. This is between people who really believe in a radically different world, and they would change America decisively 100%. Their closest parallel is Lenin and the Rise of the Bolsheviks in the early 20th century because the Bolsheviks were setting out to change Russia totally, to create what they called the new soviet man. Well, you look at what’s these people, many of whom Biden has appointed to high a government office. listen to what they say they believe in. I think this is part of why I wrote “Defeating Big Government Socialism.” It’s not just about one incompetent president or a handful of incompetent governors or congressmen. This is about a value system that’s very deep, it’s very wrong, and we have to defeat it both at the idea level and then defeat it at the ballot box.

Look, as a historian, I think occasionally you have a split and it ends when one side ends. I think we’re in a situation right now where we have to recognize that either the people who believe in the classic America of hard work, the constitution, the rule of law, patriotism, the importance of the American flag, either that side is going to win or they’re going to lose to a militant minority who are prepared to use the power of government to impose on the rest of us a radical value system. I talked to people in big corporations who are coerced every day into lying about what they believe because otherwise they will lose their jobs. Not just in schools, not just in news media, but this whole spreading of what I think is a secular religion and they are, I’m really quoting Theodore White all the way back to 1972 who said that the liberal ideology has become a liberal theology. And I think that’s the case. I think you’re dealing with people who are fanatics precisely because it’s a religious belief system.