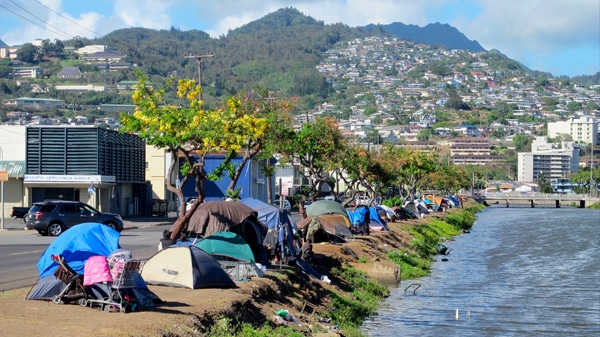 As Americans enjoy vacations in Hawaii, remember that it is no paradise for many of the residents who live there. There is no clearer example of left-wing policies turning paradise into a nightmare.

Many Americans associate Hawaii with Heaven on Earth. The archipelago’s beauty is virtually unrivaled across the globe. But there is unbelievable pain hiding in paradise.

According to Newsweek, Maui, Hawaii, also known as “The Valley Isle,” is the second-best vacation spot in the United States. In 2019 alone, the island of Maui specifically received more than 3 million visitors. Of the people who travel to Hawaii, a survey has shown that 88 percent cite natural beauty as a reason to visit.

However, Hawaii also has the 10th highest poverty rate among the states, at 15 percent. The median cost of a single-family home is $810,000. At the same time, wages are the lowest in the nation when adjusted for cost of living.

Due to soaring inflation, the average price of a gallon of milk in Hawaii is $6.99, double the national average of $3.50.

Naturally, with the high poverty rate, expensive housing, and low wages, there is a tragically significant homeless population.

In fact, Hawaii has the second highest per-capita rate of homelessness in the country. Most of the homeless population lives on the island of Oahu, accounting for more than 4,400 people. Almost 60 percent of these individuals are unsheltered.

Even worse, on Oahu, 20 percent of the homeless population are families, while 70 percent are individuals. The unsheltered homeless live in parks, on beaches, or in other public places tourists enjoy on their vacations.

Regardless of how hard the Hawaiian people work, by the end of the month, many households have nothing left financially. Hard-working Hawaiians live in poverty or close to poverty even though by federal standards, only about 11.4 percent of Hawaiians live in deprivation.

Much of this hidden tragedy is the result of the Democrat leadership of the state. Left-wing leaders continue to hurt the people of Hawaii just as they hurt those on the mainland. Rather than forming a culture of ohana, or family in Hawaiian, the Democrats are creating one on aloha, as in “goodbye.” People are leaving their homes to find new ways of living on the mainland.

The progressive policies hurting the Hawaiian people are due in part to domination by a single political party. Incumbents count on Democratic voters, specifically members of the public-sector unions, ignoring the concerns of young voters and working families.

Oahu is not alone. The problems touch nearly every part of Hawaii. Maui residents grapple with affordable housing, traffic, and public education. At the same time, the people of Kauai have environmental, crime, and public safety concerns.

As Americans enjoy vacations in Hawaii, remember that it is no paradise for many of the residents who live there. There is no clearer example of left-wing policies turning paradise into a nightmare.

Hawaiians are Americans, and they deserve better.