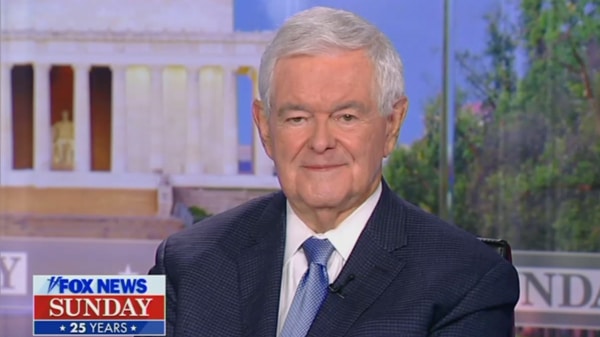 I think it’s perfectly healthy. You have three big players now in the Republican party, Donald Trump who is clearly the front runner by any standard, I think Governor DeSantis is clearly number two at this present time, and Mike Pence. I mean everybody below them is in like single digits, but those three are serious players. Pence has earned it the hard way, campaigned as congressman, governor, vice president. And it will be fascinating how it evolves.

Look, she’s a very smart professional she defended herself well. The fact is they had hour after hour after hour, they’ve moved virtually no Republicans and people are going to look back on this as a show trial. And what I think what ? is going to say is, after all the attacks on Trump starting with the Russia lies in 2016, all these attacks there are a huge number of Americans who are so sick of the elites and think they are so corrupt that they prefer Donald Trump with whatever the challenge is to what they are being fed by the national establishment. I think people should really pay attention, not to Trump but to the millions and millions of people who deeply hate what they see as a corrupt national city, and they see this particular game show trial as just more corruption.

It’s a huge risk. You are faced with an American tsunami not a Republican, an American tsunami, you saw some of that just now. 38% increase of murders in New York City in the last year. People are going to go out, look at their gas tank, look at their grocery store, and I guess the Republicans are going to pick up probably 5 or 6 Senate seats and somewhere between 40 and 70 House seats. It won’t be obvious until October. In October it will come crashing down and the Democrats are helping nominate the people they least want to see in office. It’s crazy.