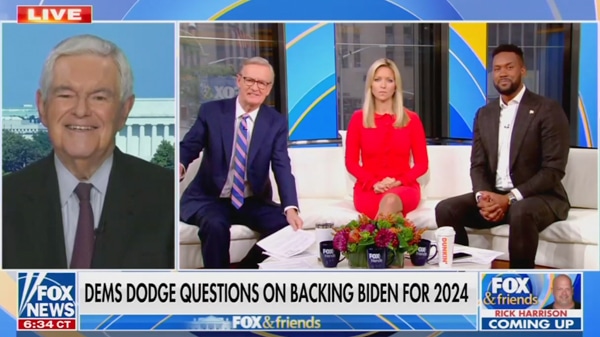 Well, I think, look, we will see if any of this changes. But, right now with the highest inflation rate in over 40 years. With gasoline more than twice what it was under Trump, with millions of people crossing the border illegally, with murder rates skyrocketing, in places Atlanta is now per capita more dangerous than Chicago. You look at all those factors and Joe Biden is attached to them. So, you know, if Warnock runs as a Biden Democrat in Georgia, he will lose, period. If Kelly runs as a Biden Democrat in Arizona, he will just lose. Politicians aren’t always idiotic. And if you tell somebody, you know, would you rather try to win or lose, as a general rule, most of them try to win. And you are not going to win this year standing next to Joe Biden. You are going to win by saying oh, I’m focused on my own race. I’m trying to help the people of America by raising their taxes hiring more IRS agents and generally screwing everything up. I mean, the Democrats have a real problem. I have to tell you and this will be my newsletter today on Gingrich 360. I am fascinated by big government machine. Once upon a time I was speaker of the house. What Pelosi and Schumer has done is unimaginable. They have a real machine for the first time in American history. It doesn’t matter what you put up they are going to get 50 Democrats plus Kamala Harris. They will get a slight majority in the house. I wouldn’t have thought two years ago that it was theoretically possible to take this narrow of majority and move this many really dumb left wing ideas, but they are doing it because they have become a true machine. By the way the machine will eventually decide who the nominee is, and it may not be Joe Biden.

Well, there was some of that with it of course in Nixon’s case he resigned because of Watergate. There was some of that with Carter. But remember, Carter in the end beat Teddy Kennedy who seemed very formidable when he started. And ended up losing the nomination to Carter who got renominated. Presidents have a pretty big ability to recuperate. What you don’t know with Biden is, one, does he continue to look like he doesn’t know what he is doing? There is only so much cognitive dissidence and confusion you can get in a particular person before you decide no it’s too dangerous. He’s really helped by having Kamala Harris because she is so bad that nobody is going to think about replacing Biden with Harris. So, in a sense. I don’t think they designed it this way. But she is in a sense his insurance policy. You know, nobody is going to rush in and say let’s get rid of Joe because Kamala is ready. The other question, question one is all of the power of the presidency. All that money as long as around he gets to spend. All the things he can do with regulations. All the deals he can cut, don’t understand his capacity to survive at least up through the nomination. If it continues to get worse. If what we are seeing is a downward slide, and the economy gets worse, international relations get worse. His ability to function in public gets worse. Then, yeah, then it’s hopeless. But we are not quite there yet.

Let me just say I did a piece last week a newsletter about Trump who is the most successful politician in American history, president, not president. The most successful in getting nominees in his own party. No one is even close to Trump in his reach inside the party. I hope he will wait and announce around Thanksgiving. I think it’s a mistake if he announces early. But anybody who doubts that he is running, I mean, if his health is good, he is on the way.