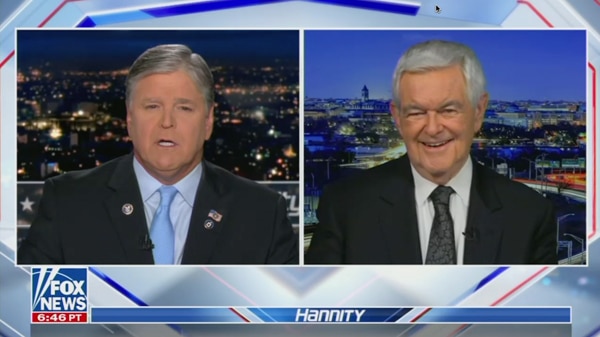 Well look I think the Biden-Warnock ticket is going to go down in flames. My guess is he’ll be lucky to get 46 percent of the vote by the time this is over. He is far too radical for Georgia, he should have been defeated two years ago and as people get to know his record and get to realize how much he’s a racist, how much he’s hostile to America, how much he’s tied into Joe Biden, I think these things come to bear and you’ll have a tough next couple months. Food prices going up, electricity prices, 20 million American families now are behind in paying electric bills because electricity prices is going up, you have a murder rate in Atlanta, has according to Channel 11 has a higher per capita crime rate than Chicago, so I think all the different factors. On the other hand, have Herschel walker, somebody who in most of Georgia is seen as heroic figure, remarkable person for his athletic ability and been in 400 military bases talking to young men and women about PTSD and coping with real problems and someone who created a business and created jobs and somebody who I think is sincere, genuine down-home conservative, the contrast couldn’t be wider than between Walker and Warnock.

No. Look, if you have got a Biden-Kelly ticket in Arizona where Kelly could not get a single additional border patrol agent, but did vote for 87,000 more IRS agents and you have a candidate like Fetterman who is for releasing murderers. You have a Biden-Fetterman ticket in Pennsylvania. Go down across the whole country. It is fair to say you think of something radical, Fetterman is for it, although currently he is hiding. I think he just turned down a KDKA debate. The fact is that Fetterman represents may well be the most radical candidate in the Democratic party this year for the U.S. Senate. Because Pennsylvania is not a radical state.