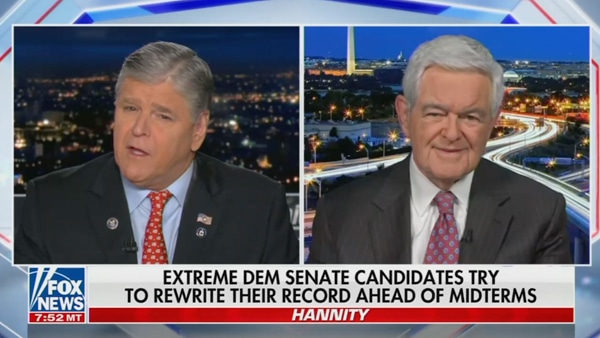 Well, I think you see both with Fetterman in Pennsylvania and with Mandela Barnes in Wisconsin that the weight of their radical ideas is gradually killing their campaigns. The lead that Fetterman had originally when he was unknown people didn’t realize how pro murderer he was, how pro-drug legalization he was, how much he was in fact a threat to the very safety of the community. Remember Philadelphia yesterday had their 1,000th carjacking of the year setting an all-time record for the number of carjackings in Philadelphia. So over 70% of the voters in Philadelphia say that crime is the greatest concern that safety is their greatest concern. That is a huge burden for Fetterman, and you begin to see it in the polls. In Wisconsin, once they got through the primary and Ron Johnson began to point out how really radical, how pro-criminal how anti-victim Mandela Barnes was. Barnes fell behind and I suspect that race may end up as a blow away by the time their done because Barnes’s positions are so radical, he is in a sense so full of himself, that’s the whole point of the way that he made fun of Steve Scalise. These people verge on being sick. In the case of Fetterman of course, he apparently had a tattoo that was either a reference to a song in favor of heroin use, or was attribute to the Crips which is a Los Angeles based very violent gang which actually was in Fetterman’s hometown and worked with Fetterman in his election. So, you look at that anything how much does the average Pennsylvanian want to have a pro-criminal, pro murderer candidate who is also for much higher taxes, is against oil and gas as an industry. And generally, would represent virtually no value that exists in Pennsylvania. And in Wisconsin you have the same problem with Mandela Barnes, and I think outside of maybe the Madison University of Wisconsin crowd. Barnes is gonna find that Wisconsin is a very tough state this year.

Sean I do 3 free newsletters a week at Gingrich360. I did one on the long term structural analysis of the election, the two most successful models that use historic data predict, they both came in at about the same number they predict 44-46 gained by the Republicans in the house. I also just did one this last week analyzing the polling numbers. Remember, the Democrats in places like California by such huge margins if you see a generic ballot nationwide the most recent one was three points Republican. That means that when you get out of California, the Republican generic advantage is enormous. And in fact, in the swing states even “The Washington Post” last week reported that Republicans have had something like 57-35 in the swing districts.