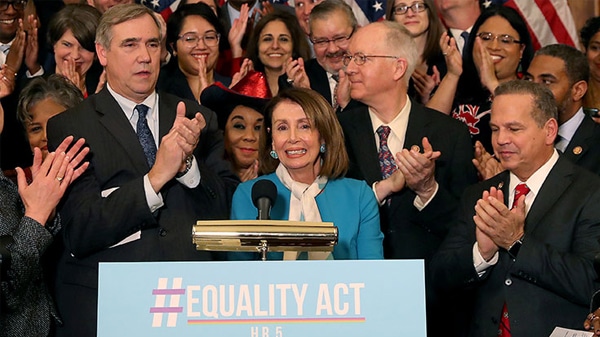 It is amazing that unanimous Democrat support for imposing transgenderism comes in the face of massive opposition by the American people.

You must hand it to Democrats: They are good at branding. But the truth is the so-called “Equality Act” should be called “The Transgender Supremacy Act.”

It is not an exaggeration to describe these two bills as transgender supremacy. They provide for the detailed domination of every aspect of life by the interests of people who claim to be transgender. Religious liberty, parental authority and responsibility, and many Americans’ fundamental beliefs would be overridden by transgender rights, according to this legislation.

There are two strong analyses of this deep bias.

One is by Katie Sullivan, who spent 11 years as a state judge in Colorado, was an acting assistant attorney general at the U.S. Department of Justice, and was the director of the Office on Violence Against Women.

Sullivan analyzed the Democrats’ so-called Equality Act and noted that it adds sex and gender identification as protected classes which cannot be discriminated against under federal law. Importantly, she wrote that the law simultaneously strips the rights of people of faith who don’t ascribe to transgender ideology.

“Religious Restoration is not a defense to a violation under this Act. This unites Christians, Muslims, Hispanics… your churches, mosques and synagogues are not safe. They have no defense. Nor do small businesses, schools, Christian grant programs, etc. … [Further,] the amendment to Title 121 and juries is going to lead to many appeals and mistrials and is ridiculous.”

The second analysis comes from the U.S. Conference of Catholic Bishops. The bishops asserted:

“The Equality Act purports to protect people experiencing same-sex attraction or gender discordance from unjust discrimination. Although this is a worthy purpose, the Equality Act does not serve it. And instead of respecting differences in beliefs about marriage and sexuality, the Equality Act discriminates against people of faith precisely because of those beliefs. In the process, the Equality Act codifies the new ideology of ‘gender’ in federal law, dismissing sexual difference and falsely presenting ‘gender’ as only a social construct.”

The Conference of Bishops pointed out that The Equality Act:

The bishops provided a remarkably detailed analysis of how bad this legislation truly is.

It is amazing that unanimous Democrat support for imposing transgenderism comes in the face of massive opposition by the American people.

In a recent poll, Trafalgar reported that most Americans believe children should not be exposed to sex change procedures. A whopping 78.7 percent of respondents said minors should wait until they are adults for so-called gender affirming procedures, while 21.3 percent said they should not wait.

Earlier Trafalgar reported for the Association of Mature American Citizens that when parental rights are involved the opposition to teachers encouraging transgenderism becomes almost unanimous. The pollster asserted:

“The survey specifically asked voters if they ‘agree with the Biden Administration Education Department’s proposed policy requiring school children to attend mandatory counseling without parental consent if they refuse to use the preferred pronouns of their transgender classmates,’ referring to a proposed policy recently outlined by the Biden administration as part of its effort to effectively rewrite Title IX.

“Among the 82 percent of voters answering ‘no’ were a staggering 93.2 percent of Hispanic voters and 73 percent of Black voters. For Democrat strategists who have continued to raise red flags about Black and Hispanic voters flocking toward the GOP, these results should underscore just how toxic the Biden administration’s hard-left approach is among the party’s traditional voting base.”

But that isn’t all. Trafalgar found that 68.6 percent of Democrat voters disagree with Biden’s transgender agenda, too. They join 83.3 percent of independents and 92.4 percent of Republicans.

On broader questions of transgenderism, America’s New Majority Project found broad and intense opposition to elements of transgender ideology being taught in schools.

The poll, which was conducted by Scott Rasmussen on behalf of America’s New Majority Project from October 18-20, found:

If the American people understand that every Democrat incumbent in the U.S. House and U.S. Senate support these extraordinarily unpopular policies, the Republican tsunami will be even bigger than currently projected.

This is the kind of radicalism that affects people’s lives and the lives of those they love. It could lead to enormous voter backlash.