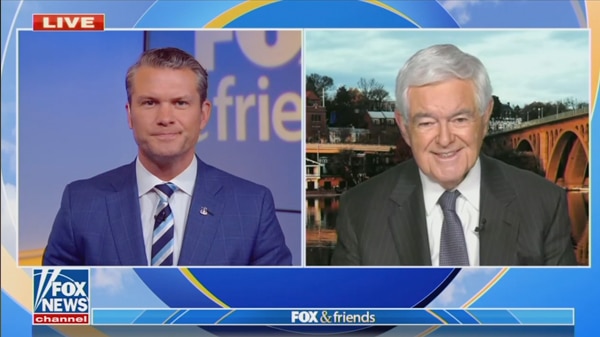 Well, look, first of all, what Biden just said on the TV was nuts. The Chinese aren’t making any contribution to global warming. They are building as many new coal-burning power plants as they can because their primary concern, frankly, is economic growth. So, they pay lip service and think we are dumb enough that we listen to the speech and ignore the reality furthermore Xi has been very clear that he wants China to prepare for war. He says openly we need to prepare for war. That’s not hard to translate. Do you know what it means in English? We need prepare for war. The fact that the Biden administration cannot cope with this, is not building up the Navy, is not investing in our defenses. I think Xi probably looks at dealing with Biden sort of like here is this dumb guy that I can manipulate. You noticed who walked to whom? You think that China it didn’t matter that Xi is standing firm and Biden comes to him? Which is very typically of the kind of games they play about body language.

Look, first of all, if climate change is the most important thing, we ought to have a dramatic program in the new small modern nuclear power systems which are the least carbon producing systems of power in the world. We don’t do that because that doesn’t fit the elite’s vision of the reality. So, we have Europe now suffering. The United States is going to be suffering. But from the Chinese standpoint, imagine you are XI jinping you think gee I wonder how Hunter is doing. You have all the documents, all the data. You know this is an administration that is easy to manipulate. And you keep building up around Taiwan and the South China Sea and the U.S. does nothing. Every evidence and some of the senior admirals have said this we have is Chinese building a military capability that we literally may not be able to match and so I think that Biden meeting with Xi does not give me any great sense of security.

Hatcher was speaker with 221, and 223 in two different congresses. We will have a majority; it will be very narrow, and Kevin will be the speaker. The only person, you look at the leadership in Washington, he is the only one who gained seat in 20 and 22. He went out and raised $480 million. He campaigned everywhere in the country. And I think there is no practical alternative to McCarthy on the Republican side. So, I think he will be speaker and as I said, Hatcher governed successfully with 221 and 223 so it’s doable.