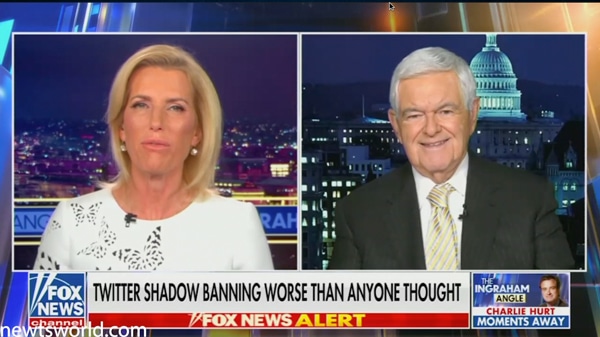 Look I think all of it ought to come out in the open. It’s amazing that here is a first generation immigrant to America, who is doing more to uphold American values, the first amendment, your right of free speech than anybody we’ve ever seen. I mean it’s remarkable what he’s done so far. I hope he’ll have the courage to continue and let it all out there. I mean, people deserve to know what was going on, and then the challenge comes to Facebook and to Google, to match that kind of openness Because they have been at least as bad, and Google in some ways, has been worse, I think, than it was Twitter. And these systems are so gigantic, they are so powerful, and they are so much in everybody’s lives that they have to be transparent, or we’re going to have to do something pretty dramatic to limit their capacity.

What you’re saying is what originally fascism was all about which is the idea that big government gets together with big business to control the country against small business and against individuals. And I think what we’re going to find out, what we’re beginning to find out is, that the F.B.I. was deeply involved in all of this. We’re going to find out, I think, that the center for disease control, that Dr. Fauci, who remember, he’s a public official. He’s not just a celebrity. He’s a government official with certain obligations and certain responsibilities, and I think we’re going to find out, all of these people were violating the first amendment, behaving illegally, and that this is a much deeper and bigger mess than people realize.

Laura, I don’t quite know for reasonable people how you get across the idea, these people are just liars. It’s not complicated. They are liars. They lie all the time. They have total contempt for the rest of us. They think they can break the rules and get away with it. They think they are somehow this elite that’s above us and that we’re too stupid to know what they’re doing and all too often, and this is the case, by the way, I think Kevin McCarthy is showing the right leadership with people like Adam Schiff, who was chairman of the house intelligence committee, just routinely lied to the American people. Totally misinformed them. Well, there ought to be a consequence and we ought to start with simple old fashion language. These people are liars. They ought to be ostracized, they ought to be kicked out of polite society if there is such a thing anymore. But we shouldn’t kid ourselves. I don’t need any complex explanation when I’m looking at a total liar.