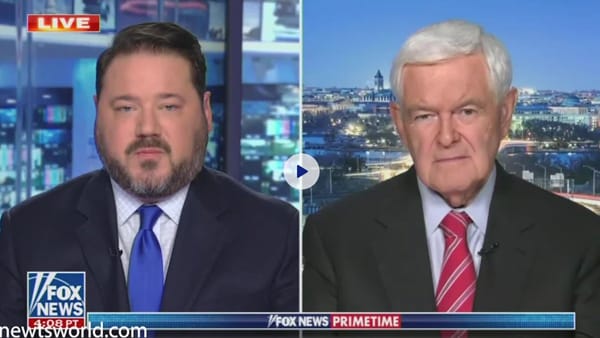 Newt told “Fox News Primetime” the proverbial “disease” is not one of the brave rank-and-file servicemembers, but one spread by politicized and incompetent leadership from the top of the Pentagon, thanks in part to “nutty” people that Presidents Obama and Biden installed in the bureaucracy.

Well, I think you first have to recognize that this is part of a larger problem the big government socialism which now dominates our elites it corrupt everything it touches. It corrupts the FBI, it corrupts the justice department, it corrupts schools with students who can’t pass any tests it corrupts our major corporations. So, of course the same disease, the same kind of spreading, if you will across the land of these kind of corrupt ideas has hit the Pentagon. And people like the general Milley, you know, he did this. And he decided from Obama to Biden, which is the same system, Obama began the corrupting of America, and some day people will write about how much his appointees and his policies and his rhetoric undermined America and weakened America and increased by the way racial tension in America. Then his vice president came into office bringing even in nuttier people to be part of the government and, if you are a sophisticated Washington politician, General, you look around. There is a great novel by Anton Myrian called ‘once an eagle’ which takes two officers from the first World War up through Vietnam. One is the kind of person you described with admiration, combat oriented, honest, willing to leave the service rather than lie. The other is a pure staff officer, politician, rising by telling power whatever it wants to hear. It’s a great novel about the dangers we now face. And this is — but this is true across everything. It’s true in the news media. It’s true in the universities. The depth of corruption, which is at the heart of big government socialism, is a topic that hasn’t even begun to be discussed yet. It’s a moral corruption. It’s a corruption which breaks the law. It breaks the law at the border when 400,000 people cross the border every month, that’s a level of law breaking and a level of corrupt behavior that is astonishing. And you find it every aspect of the current system.

First of all, general H.R. McMaster wrote when he was a very junior officer a brilliant book called “Dereliction of duty” which looked at Vietnam in exactly the same parallel. We came out of Vietnam. The officer corps grabbed itself and decided it had to learn terrible painful lessons and all through the 1980s and I was allowed to be parts of this, they really fundamentally rethought what they were doing. And by 1990, they were a remarkably better system than they had been in the 1970s. And we saw all of that. Now we are back in the same business. What you have and I have to say we all owe general Milley a debt of gratitude, he is so incompetent. He is so blatantly obvious, he lies so clearly in public, what he says is so clearly despicable that anybody who has any sense at all knows this guy shouldn’t be chairman of the joint chiefs and it tells you how sick the system is that the system thinks it’s fine. There is something deeply sick about the idea that starting tomorrow this corrupt group of left wing idealogues is going to monitor every soldier, sailor, marine, coast guard and airmen. I find that so unamerican, so much like Chinese communism or the soviet communism that it is — I’m surprised we aren’t going to have the American people in rebellion and of course you just saw the same thing with the justice department deciding that the FBI’s big job is to check on PTA meetings and whether or not parents are acceptable. If that isn’t a corruption of the system, I don’t know what is.