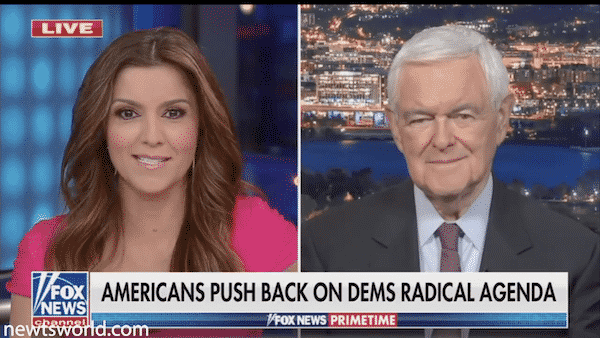 Newt talks about how Americans are fed up with big government socialism and why it affected the most recent state election outcomes.

Let me say first I agree with Vice President Harris. I never thought I would find myself saying that. I think that she is right. This is a big bellwether about 2022. If I were a Democrat that would sort of worry me. I do think that Kamala Harris is right in saying that. I want to take one minute to say the most interesting race yesterday was Ed Durr. Ed Durr is a truck driver. He spent $153. Sixty dollars on donuts and coffee at Dunkin’ donuts for donuts and coffee volunteers. He beat the state New Jersey $2 million in his war chest.

That’s great. That’s fabulous, I think it’s the most interesting story yesterday of the whole country. Whether it was Lancaster, Pennsylvania, whether it was San Antonio, Virginia, which you have been talking about, large — the assembly and senate races in New Jersey everywhere you turned including amazingly Seattle which is electing a Republican mayor and Republican attorney in a huge shift, I mean, nobody would have bet that Seattle would be going that way. And that leads me to believe that the signals are there for us to pick up between 40 and 70 seats in the house and at least four senate seats next year. People are fed up with big government socialism for a practical reason, it doesn’t work. It doesn’t work when you fill up your car, it doesn’t work if you want to control the border, it doesn’t work if you want to educate your children. And so, the country is speaking as a free people. I think they are going to keep speaking.

I think that understates the brilliance of the Glenn Youngkin campaign. Glenn Youngkin decided early he was going to focus on state issues, cutting taxes, creating jobs, solving infrastructure and education. And on education, he had a very powerful two-handed approach. One hand he said, look, we are going to have to spend more. We have to improve the situation for teachers. With the other hand he said we need to have public school choice. We need to clean out things like critical race theory and all these weird left-wing ideas. So, he really had a powerful direct appeal that was very issue centric. And I think that’s a powerful message for Republicans next year, it’s a message for Mitch McConnell since you raised his name. Kevin McCarthy clearly understands this. If you look at what Kevin has been doing for three years, it’s a very issues centric, better future, the reason I wrote Beyond Biden, was to lay out a positive future oriented approach. I think Republicans next year has to be very direct enough about the failings of big government socialism. They have to be even more clear about the kinds of things that they would do that are right. And I suspect we ought to consider seriously going back and creating a new contract with America next fall, so people can say oh, you are going to do these things if I elect you. And you watch, I think there is no question that governor elect Glenn Youngkin is going to go in and he is going to from day one is going to execute on what he campaigned on. I think he understands the power of keeping your word to a customer, his customers are the people of Virginia. The team he has assembled as you point out a remarkably diverse team. If you look at which party now is reaching out and becoming inclusive in Virginia, it’s clearly the Republican party.

Yeah, Beyond Biden you get it any place that sells books or come to Gingrich360 and get it there. I do think, by the way, that when the governor said parents had no role in education, he ended his campaign.

He didn’t know he did but that was the end because people looked up and said boy, if you believe that I’m not going to vote for you.