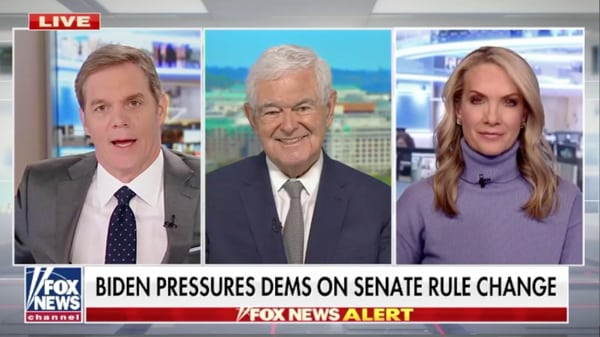 Ahead of President Biden’s planned visit to Georgia to give a speech about changing the Senate filibuster rule, Newt predicted on his “America’s Newsroom” appearance Tuesday that Republicans will win back both the House and Senate because the Democrats’ strategy has simply not been “working.”

I think Stacey Abrams is very smart. I think she realizes that a photo op next to president Biden and Vice President Harris hurts her, doesn’t help her. And I think she also agrees with the civil rights groups who think this thing is all phony. They won’t get it through. This is the second big effort they will try to make in the senate that will fail. People who are smart know that. I think it’s puzzling why the president would put so much effort into what is clearly going to fall. He is not going to succeed with this. Meanwhile, he is not solving the price of food, he’s not solving the price of gasoline. He is not solving the border. He is not solving the logistic chains. Go down the list of the things they’re not doing, and they aren’t solving the problem of test kits for covid. It is very puzzling how much they are owned by the radicals and keep doing these dances that just plain fail.

I think more than that. They are out of touch with reality. They’re in a very tough position. They have adopted policies the country hates. When you tell people that New York City just allowed 800,000 non-citizens to vote in municipal elections they think that that’s crazy. When you tell them that Governor Newsom has said he will pay for healthcare for every illegal immigrant who can get to California, they think that’s crazy. The bill that the president is pushing. President Biden is pushing a bill that 85% of the country opposes. Most Americans, including African Americans and Latinos think you should be able to identify who you are. You should be an American citizen in order to vote. You should have to vote in an orderly way. They are against ballot harvesting they understand same day registration at a time when you have millions of illegal immigrants crossing the border is an invitation to sheer theft. And so, it’s puzzling why these guys have gotten themselves down this road. These guys meaning Schumer, Pelosi, Harris, Biden, that is clearly a dead end and yet they keep trying to dig their way deeper, not dig their way out.