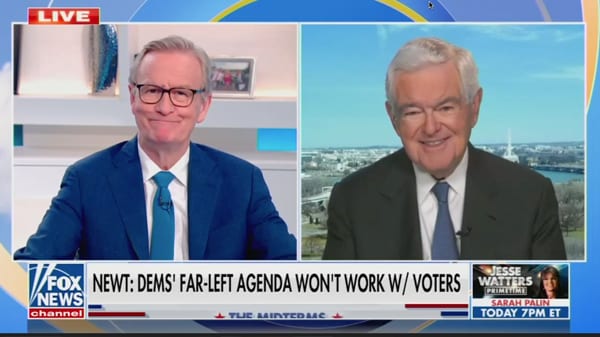 Well, you know, if you only spent $80,000 for an electric car you would be saving some money on gasoline. Plus you’d be spending money on electricity.

Yeah. Look, the Democrats have a huge problem. Almost every one of their policies is unpopular. And the ones that aren’t unpopular are failing. So, they don’t want to admit they got to change policies because that will make their left unhappy. And so, they say it’s just a messaging problem that I can’t convince that you it’s great that the price of food is going up. The price of gasoline is going up. That the president looks weak and silly overseas that the vice president may be the dumbest person ever elected to that office. That focusing the border patrol in learning the correct pronouns which is one of the most recent efforts rather than stopping illegal immigration is somehow a clever idea. Go down the list. They can’t give up of any of these, things. They can’t come out and say we love oil and gas. So, they continue to contact the oil and gas industry and they are shocked that the price of oil goes up. Now, I think this administration may be more out of touch with reality than any administration in modern history.

Well, there is a brand-new poll out in Britain that the democracy institute released that shows that 52% of Americans think it would be better to have Biden leave than Putin. 43% favor getting Putin out. That’s a new poll it’s in a British newspaper they said who do you think will be better for America’s future get rid of Putin or get rid of Biden? And by 52 to 43 they picked getting rid of Biden over getting rid of Putin. That gives you some hint that maybe the Biden administration is not convincing people it’s doing a good job. By the way, remember, Bill Clinton had to fight the left. Bill Clinton had to sign welfare reform. He had to sign the biggest capital gains cut in history. He had to sign four consecutive balanced budgets. The way he survived is he said oh, the American people don’t want this left-wing stuff. I’m with the American people, and that’s part of why the left has always hated him. Because they saw him as having sold them out rather than fought for them. And I think Biden is trapped because he doesn’t want his allies on the left mad at him and the rest of the country thinks his allies are nuts.