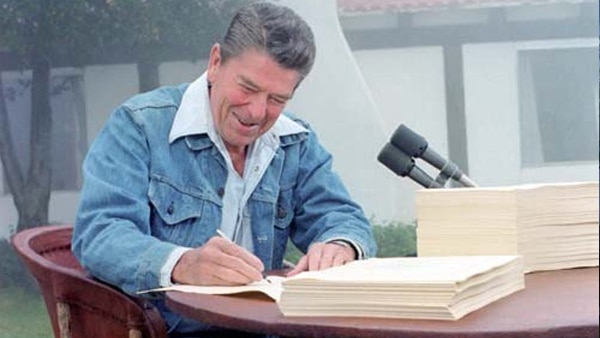 President Reagan still matters now because he showed Americans that both parties can work together for a collective goal. The current prices of gas, food, and overall cost of living must not become the new normal.

In August 1981, President Reagan signed the Economic Recovery Tax Act at the Reagan Ranch in California. This legislation enacted by the 97th U.S. Congress resulted in significant economic prosperity and was the largest tax cut in U.S. history.

The Economic Recovery Tax Act set the tone for the Reagan administration, which prioritized economic policy that worked for Americans.

For example, this legislation included a 25 percent reduction in marginal tax rates for individuals over three years and inflation indexing of tax brackets, which especially helped middle and low-income families.

The tax cuts not only altered the course of federal tax policy; states also mirrored the successful approach by reducing their tax rates.

Every day hard-working citizens were impacted by the marginal tax rate reduction since it had impacts on income earned through other activities such as education and investing. The economic boom of the 1990s was largely credited to Reagan’s economic policy.

When Reagan entered office, the national poverty rate was at 14 percent. It went down to 12.8 percent by the time he left office. President Reagan did not target a specific class or political party through the tax cuts, he helped all Americans.

The Biden administration has learned nothing from Reagan’s approach. It has allowed consumer prices to rise 8.6 percent, the most since 1981. There has been $2.8 trillion of government deficit spending as of 2021 alone.

Problems with inflation have been ignored, and bad energy policies raised the cost of gas and inflated the cost of goods for millions of Americans. The current costs of gas, food, and overall living must not become the new normal.

President Reagan restored the economy after the failures of the Jimmy Carter administration. Reagan’s model resulted in inflation falling from 13.5 percent in 1980 to 4.1 percent by 1988, unemployment dropping from 7.6 percent to 5.5 percent, and the net worth of families earning between $20,000 and $50,000 annually growing by 27 percent.

He thought the American government should work for, and serve, the people – and that it was possible to rebuild the economy and move into a new era of prosperity.

Ultimately, our current leaders need to make a powerful moral and political case to alter the current president’s negative impact on Americans and pull the economy out of freefall.

Then, in 2024, Americans deserve a president who will use Reagan’s model to make America great again by re-establishing the goal of a balanced budget.