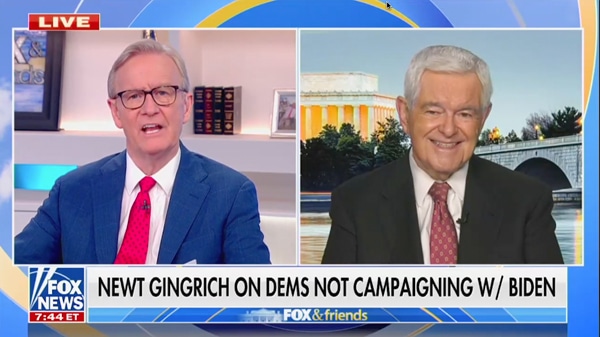 Well, look, I think they think he weakens them. And I think that they both have two problems. One is you never quite know how well he will perform or whether it will be one of those embarrassing events where he can’t remember what state he is in or who is he campaigning for or whatever. And then second, in a lot of states, particularly where we have senate races, they are not Biden’s states. I mean Biden in California probably would be okay. Biden in New York might be okay. But you start taking Biden to Nevada or to Ohio to, an example you used or to Pennsylvania, and I think suddenly, you have Georgia, for example, you know, Herschel Walker will probably win in the end because Warnock is so closely tied to Biden, and I think Biden in Georgia is like 38%. So, his national average is actually stronger than his average in the individual states that happen to have senate races this year.

I have known Liz for most of her life at least since she has been an adult and I’m amazed. There is a deep policy difference there is no question Trump ran in many ways as a repudiation of the Bush-Cheney administration. But to go back home to the people that you claim to represent to only get 29% support and then decide that the other 61 — they are the ones who are wrong. They are the ones who are sick. I think that Liz has arrogated to herself the standard of being the more judge of millions of Americans around 37 or 75 million Americans who voted for Trump because they are sick. They voted for Trump because they deeply dislike the establishment. And no matter what you tell them about Trump, they dislike the establishment even more. So, it’s amazing to me that nobody who is in the anti-Trump faction has stopped to say what is it we are doing that repels so many Americans that, again, Wyoming is a great example the Cheney name was a one-time magic. Now it just doesn’t get beat it gets humiliated. 29%. Take away the Democrats switched party to vote for her. She got probably one in every four Republicans, it’s amazing.  So don’t take what she says very seriously.